Sometimes a song relieves us, and we can’t say why.

Since time immemorial, sound (and certain frequencies) were tools for relieving agitated minds and finding an internal equilibrium.

The ancient Egyptians placed accent on the “vowels” in their chants because it provided them with therapeutic benefits. Tibetan monks use scales to emit vibrations which would be “the manifestation of the Universe”.

Although no study has yet demonstrated these effects, millions of people fall asleep while listening to these frequencies.

Hoom thus did not hesitate to add them, in different ways, to its sounds and stories.

Because there are as many sleeper profiles as sleepers, the HoomBand application (available for Android and Iphone) wants to be the most complete possible, to provide a customisable solution, depending on the mood or sensitivity of each.

In this article we try to understand how sacred frequencies work and how we have chosen to include them in our content.

1- What exactly is a sacred frequency?

As the famous engineer and inventor Nikola Tesla said: “If you want to know the secrets of the Universe, think in terms of energy, frequency, and vibration”.

Every human being emits a vibration depending on their state and mood (see our article on binaural frequencies).

The “sacred frequencies” would have the capacity to “harmonise” our frequencies and our vibrations to relieve the body and mind, because they would be aligned to the frequencies originating from the Earth.

So it is a music therapy, having a deeper effect than simply listening to music for pleasure.

In the 11th century, Guy d’Arezzo, a Benedictine developed a method for learning music, which rests on 6 scales (or frequencies): Do, Re, Mi, Fa, Sol, La. These are the first syllables of each half verse of a religious Latin chant: the Hymn to Saint John the Baptist.

Essentially, some old Gregorian chants were built from this structure, and supposed to give spiritual blessings during the religious mass.

This religious music theory then became forgotten until the 1960s, and was taken up by physician Josephe Puleo who recomposes the disappeared range based on the study of Pythagorean numbers and the Bible.

He then highlights 9 ranges, known today as “sacred frequencies”.

These 9 frequencies are all associated with an “effect” on the human body and mind:

Obviously, we use the conditional because none of this has been scientifically proven.

2- Its effectiveness on the quality of your sleep

There are almost no studies on sacred frequencies, but their renown was built empirically: listeners feel that these frequencies relieve them and ... that’s it.

According to the research of Dr. Alan Watkins, a neuroscience researcher at Imperial College London, chanters of Gregorian chants have, during their performance, an arterial tension and blood pressure lower than when in a normal state.

Scientists have also realised that Gregorian monks needed little sleep (2 hours a day for some!).

Therefore, it is not a question of believing or not believing, but of feeling.

3- Sacred frequencies, sprinkled in our stories and sounds

The Hoom application does not offer soundtracks with only sacred frequencies, which would not be very pleasing to hear. .

We prefer then to “coat” them and include them in numerous hypnotic stories, an a sound background or in our guided meditations for multiplying their relaxing power.

Sacred frequencies and your HoomBand are thus especially effective:

Here is an example of sacred frequency sound, available in the HoomBand application (available for Android and Iphone): 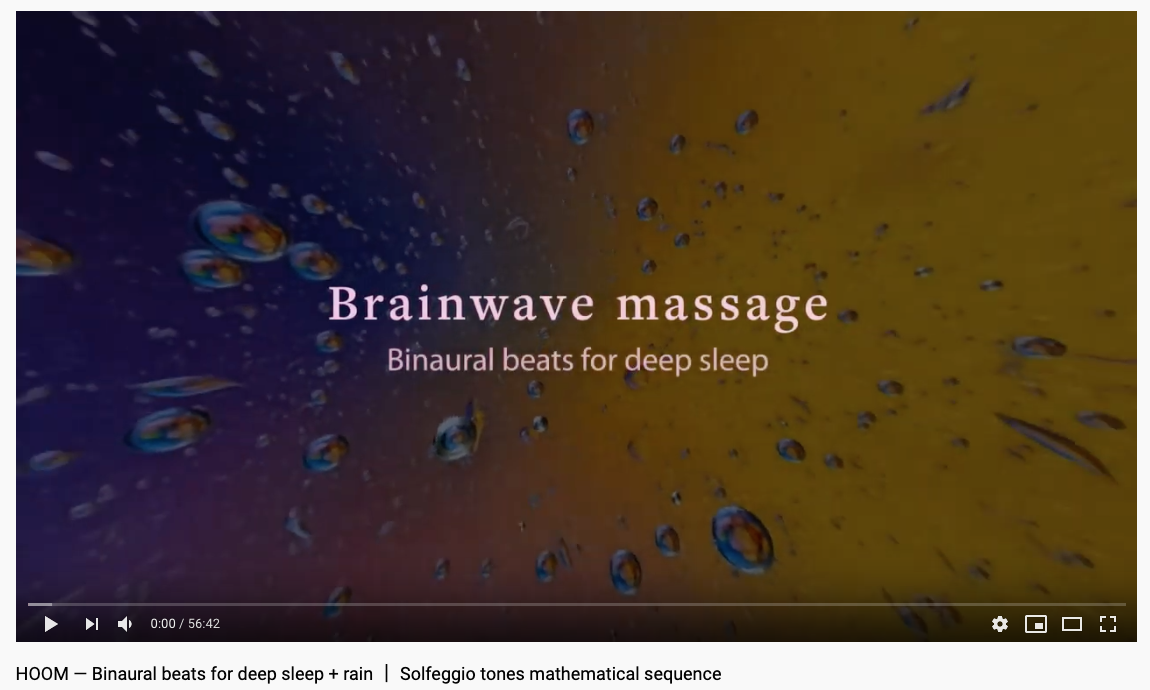 Our library of sounds and stories is frequently updated. Every night, its atmosphere !

Discover other HoomBand secrets for you to fall asleep: